Michelangela and Debuts:
Discovering the Self

Enjoy the adventures of a tiny artist-spider, Michelangela, who discovers romance and herself. Searching for her place on earth, she inspires a prince who copies her intricate designs and becomes world famous.

Then delight in the big-hearted heroine, Amore, who is ostracized by her family and townspeople because of her generosity and uniqueness. Follow her to one of the world's greatest cities, where she finds love and appreciation by those who see her as a "swan" rather than as an "ugly duckling." In a witty, alternative ending, a crafty lawyer markets her and enables her to become a world-renowned icon.


Title:
Michelangela and Debuts: Discovering the Self

Available through these Resellers:

Excerpt from Michelangela and Debuts:

Long ago, a tiny spider, Michelangela, was born in a dark, cavernous mansion.

A solitary old man rattled through its half-empty rooms, cane tap-tapping, sparking swirls of dust. His days melted away in napping, shuffling up and down the long, winding staircases, and nibbling meager meals in the paint-peeled kitchen. To his poor, tired feet, short distances were marathons, and hazy cataracts dimmed his gray eyes.

As years vanished, he showed absolutely no interest in housekeeping and shunned all visitors, except his only daughter, who came every Sunday with fresh food and clean clothing.

“What can I do for you, Dad?” she asked in a lilting, smiling voice.

“Nothing, thanks! I’m quite content,” was his usual response. If she opened the creaky broom closet and reached for the rusty handle of the ancient feather duster, he would stop her abruptly.

“You’re not a scullery maid!” he snapped, in a whispering trace of his once strong and commanding tone. “Everything is just fine the way it is. Go along and have fun; don’t worry about me.”

Because of the old man’s lifestyle, every spider in town was attracted to his home. The large, spacious rooms and dark hallways were havens from icy cold winters, drenching spring rains, blistering hot summers, and the constant nuisance of falling autumn leaves.

It is no surprise, therefore, that Michelangela’s life was the happiest a little spider could dream of—or imagine. From the moment she opened her tiny eyes, she discovered a kind of Spider Heaven: a world of enormous, elaborate webs and sympathetic, kindred spirits.

Her earliest memory was her cradle: a supportive network of suspended strong threads prepared by her mother for her brand-new little body. Michelangela’s first tenuous steps were on hairsbreadth, curving pathways; and as soon as her footing was secure, she scurried down fine-spun highways and filamentary byways. Little by little, she became daring and left nearby familiar perches for far-flung webs.

Many wonderful hours and days were spent swinging, gyrating and dancing in a series of miniature tightrope acts. Anyone would have admired her agility, as she maneuvered like a lithe, young monkey, flying through the air, swooping from one flossy thread to the next. Skittering along, like the sailors of old, charging up a vast network of interlocking ropes, she hurried to the very top and back down again—eventually landing upright on at least several of her many feet.

Michelangela believed that her mother must be the most amazing creature on earth. Who else could embroider such luxuriant, complicated webs and round them out with nooks for climbing and sliding? And in such profusion! Her mother’s web-work was everywhere: decorating windowpanes, floating from antique lamps, outlining the big old arms of dining room chairs, drifting gracefully down from doorways. Her original, dazzling patterns ornamented the crystal chandeliers, and her feathery filigree draped elegantly across floor-to-ceiling bookcases.

Why her mother even knew ways to create dark, inaccessible corners so that you could play hide-and seek all day long—and never be found!

Michelangela watched her mother spinning for hours, sometimes for entire days. If only she could make webs like those! Try as she might, little Michelangela was simply all feet, at first. No sooner did she create a thread, then she was all caught up in it, her own prisoner. In an instant, with infinite patience and kindness, her mother stopped whatever she was doing to rescue and disentangle her well-intentioned offspring.

Michelangela studied her mother’s every movement, knowing that she was in the presence of a master. Then she huffed and puffed, until at last she was able to put two threads together, three, and then four. “Like this,” her mother would show her, handing down her craft to the next generation. 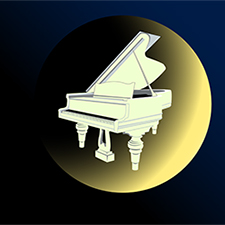 Available through these Resellers: